Google Camera or well known as GCam is known for its Night Sight mode that captures better low light shots on mobile phones. In the next section I am going to compare some of the shots captured by GCam Night Sight mode, HDR+ mode, Astrophotography mode and Stock camera Night mode to see which one photo captures more details and light.

What is the light exposure in the place?

It is important to know the actual lighting of the place where I captured the images on the Redmi Note 7 Pro. So, I have captured a few shots of that too.

Before going into comparing the low light images on Redmi note 7 Pro GCam or Stock cam, below are some images that shows the actual light exposure available at the scene, captured on a DSLR camera. You need to click on the image to enlarge it. Well, it is arguable about the lighting at the actual scene when you see the images captured by GCam. But, this is a fact that GCam captures more light on Night sight than a human eye can actually see! Redmi Note 7 Pro Google Camera Astrophotography Sample 1
After uploading, the images were down scaled by WordPress itself. More or less everything is still visible but if someone needs, I can upload the unedited images to some external site.

You need to click on the images individually to enlarge it.

To find out the exact answer lets analyse few parts of the images captured by the GCam and the stock cam. I have zoomed the stock camera night mode image and the GCam night sight image for comparison. I hope the comparison is quite enough to show case the low light image processing capability of Google Camera on Redmi Note 7 Pro. If it is still not enough, I have captured few more shots in different other locations as well. See the below galleries for more. 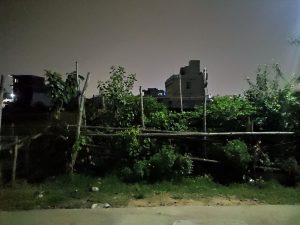 Where to Download Google Camera for Redmi Note 7 Pro?

If you are convinced with the Night Sight feature of Google Camera on Redmi Note 7 Pro and want to install the GCam on your phone then below are some of the compatible GCam downloads: