Now there are many situations where just for fun, we want to prank our friends or colleagues. And, the first thing that comes to our mind when we think about pranks is changing our voice and calling our friends. But, there are not many changes that we can do in order to change our voice naturally. Luckily, we have several apps on the Play Store, that you can use to change your voice. In this article, we will look at the best voice changing apps for Android.

Moreover, you also don’t need to install software on your PC/Laptop as you can do all the tasks on your Android device. Let us go straight into this article and understand the features of the apps, one-by-one;

Here is the list of apps that could help you to change your voice and do little pranks on your friends and colleagues.

Probably, one of the best and oldest voice changing apps available on the Play Store is the Voice Changer by AndroidRock. You get a decent catalog of effects to change your voice. It includes bee, old man, martian, fan, hoarse, drunk, underwater, and many others. You just have to record your voice with this app and the app will convert your voice and filter it with effects you choose from. Moreover, you can also apply a filter from the app on your external voice recordings meaning that is not recorded via this app. You can change the voice of third-party voice files as well. You can share the recordings within the app to various social media accounts or via Bluetooth. It has a simple and intuitive interface that lets you change your voice easily.

The Squeak Voice Changer app has a new and interactive interface. It blends in well with the new generation design of the smartphones. This voice changing app lets you quickly transform your voice into the effects listed in this app. There are a lot of effects to choose from like Bruce the Bot, Patrick the Monster, Julius the Bear, etc. Moreover, it has a preview function, that lets you preview the voice effect before recording your voice with that filter. Once you record with one of the filters, the Squeak app will change your voice to whichever character you choose. Moreover, the output is very clean and almost accurate as one would wish. Once the file is converted, you can either download it or share directly to social media accounts or via Bluetooth. however, in order to use all the voice effects, you need to buy the full version of the app.

The app name is simple and gives you the idea of what this app can do. The Voice Changer app by 302 Lockscreen can perform the same tasks as other apps in this list but, there is some difference that is worth noticing. Firstly, the app interface and design are simple yet very modern. The transitions, the buttons and other interface feature of the app are sleek and intuitive. The process is similar for changing your voice. You need to record your voice and apply the filters to transform your voice. 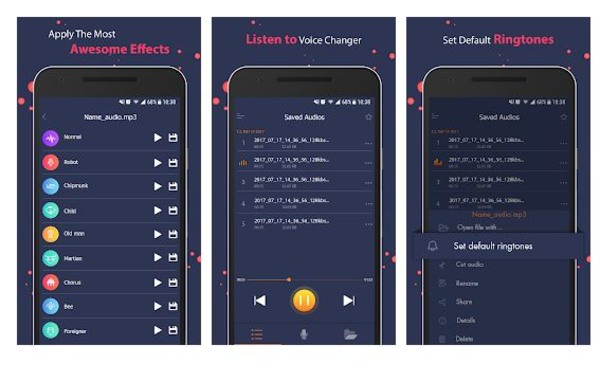 Moreover, you can also cut or crop your recording and select the best part of the recording. But, the downside of this app is that it features a fair amount of ads that could be annoying for most of the users.

A different kind of an app in this list is the Narrator’s Voice. This voice changing app lets you convert and record your narrations into effects within the app. You need to just type the text you want to say as a message and select a voice effect to convert your text into the chosen voice effect. You can download and share the audio with anyone you want via different means. Moreover, you can also import other text files from outside the app to convert them into an audio message with a voice change effect. The best feature of this app is the in-built translation. This app not only allows you to change the voice effects but, you can also change the language of the text to transform your recording into a different language. The supported languages are Japanese, Portuguese, German, and Italian. For a fun fact, you can also change your text to sound like the Chipmunks, Barack Obama, and Cortana. It contains in-app ads and to remove them you need to buy the upgraded version of the app.

The Handy Tools Studio Voice Changer app is a great app for changing your voice into many different kinds of effect. You get a lot of fresh functions to choose from within the app. You can select different voice effects from the list available in the app and also save them in your local storage. But, the main feature of this app is, it has app effects specially made for singers. You can record your audio and then change your ordinary recording into a studio like effects like chorus, theater, karaoke, concert and much more. Moreover, you can also change your voice effects to a bunch of fictional characters like the minions from Despicable Me, the Transformers, and the Star Wars. Overall, a good tool for changing your voice and sharing the fun with your friends.

There you have it from me in this article. I hope you would enjoy these fun apps to play pranks or share the fun with your friends or colleagues. Let us know in the comments if you have a favorite app apart from the mentioned voice changing apps.