Software updates are not always stable and are sometimes very much frustrating to deal with as a user you do not have any control over. Similar is the case with the latest Android 10 update on Zenfone Max Pro M1 which caused Widevine L1 issues on the phone.

Asus launched its budget mid-range smartphone Asus Zenfone Max Pro M1, back in 2018. The device was a champion in all terms and was a solid competitor against the Redmi Note 5 Pro. It was running on Pure Stock Android 8 Oreo and was promised two significant updates for the device, i.e. Android 9 and Android 10.

Back in April 2019, the brand released the stable Android 9 update for the same. Since then, they have been struggling with the updates for the device. That is, they have been pushing monthly updates, but it had some weird issues. Say, for example, the August 2019 update made the Widevine certification from L1 to L3. This means that you can’t stream HD DRM content on your device. But Asus claims that they have fixed the issue with the September 2019 update. That update came with the build number 16.2017.1908.058. However, even after that, the Widevine certificate issue continued for some.

Back in January, the brand started an open beta of Android 10 for the Zenfone Max Pro M1. They have rolled out three beta updates, and they couldn’t release a stable one till date. Also, it should be noticed that the Widevine issue continues for some users. Recently, a user took this out to ZenTalks, and he replied in this way. Hi, we suggest you to please visit the nearest ASUS service center for better assistance.

This means that some internal error happened with the device. Some reports suggest Asus is going to drop the support for the Zenfone Max Pro M1. It means that the users won’t receive the stable Android 10 update. You can see the response of Asus from the below screenshot. 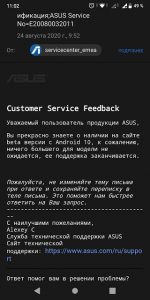 Dear user of ASUS products,
You are well aware that the beta version with Android 10 is available on the site. unfortunately, nothing more is expected for the model, its support is ending.

Well, as of now there is no official confirmation from the brand regarding the same. But, you stay tuned with us for more updates like these.