From the past two years, Asus has been launching awesome value for money flagship devices for the consumers. Back in 2018, the brand unveiled the Zenfone 5Z which globally available including in markets like India. The Zenfone 5Z had received acceptance from everywhere. But for some reason, OnePlus 6 overtook the device. That is, the OnePlus 6 had an AMOLED panel, Dash charging, and Oxygen OS. However, the Zenfone 5Z came with Android 8 Oreo. Later, the brand had pushed two major updates for the device.

It includes the Android 9 Pie update and Android 10 with ZenUi 6. The device currently runs on Android 10, and since it’d received two major updates, we all thought that it’ll not receive Android 11. However, users of the device have asked in Zentalks about the update. Interestingly, one of the Asus moderators has replied that the Android 11 update for the Zenfone 5Z is still under consideration. So, there is a chance for getting the update. 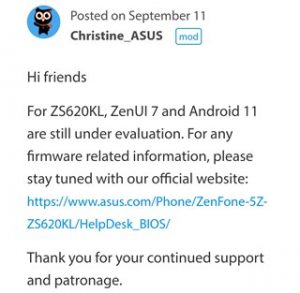 Do note that, Asus only rolls two major updates for its devices. So, the chances of Android 11 is very less. The 2019 flagship device i.e. the Zenfone 6 aKa 6Z is eligible for the Android 11 Beta. In fact, it is the only device from Asus which is eligible for the Android 11 Beta update. It means that it will receive the ZenUI 7 update on top of the new Android 11. However, there is a bit downgrade for this too. Because Asus launched a lot of new features with the Zenfone 7 series which introduced with the ZenUI 7.

The new features like the “bouncy UI effects”, and the “force HDR+” found in the camera app will not come to the Zenfone 6 or the 6Z. It was confirmed by a moderator of Asus’s ZenTalk. Stay tuned with us for more articles like these.