Vivo launched its Vivo Z1x in the year 2019. It is an awesome mid-range smartphone with great specifications. There is only a certain no of devices from the brand which are worth the price. The Z1x was one of the devices which fall in this segment. The brand has been pushing out its Funtouch OS 10 on top of Android 10 for most of the devices which were launched in 2019. Back in June, they have started pushing the same for the Z1x.

The update came with the version number 6.8.15 and weighs over 3.2GB in size. So, make sure that you have connected your device into Wi-Fi for uninterrupted downloading. The update comes with support for all native Android 10 features. Other features include new animations, new icons, new shortcuts, new live wallpapers, edge light effects, JOVI assistant, and App sharing.

Initially, the details regarding the update were shared by some users on Twitter. The brand was commenting that the update was still under testing. The brand continued to say for almost a month. Sadly, many of the users who received the update was complaining about the heavy battery drain issue. Interestingly, the brand has fixed that issue now. And on July 31, the brand has started rolling out a new update that is available for almost every user of the device. 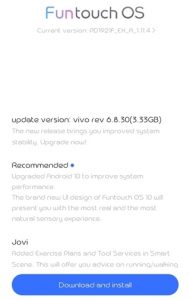 The new update comes with the version number 6.8.30 and weighs over 3.3GB. Yes, this update is also heavy like the old update. The above screenshot was shared by a user on Twitter. Stay tuned with us for more information like this.