Vivo has been continuously rolling out its Funtouch OS 10 update on top of Android 10 for its most smartphones out there. The brand has pushed the Android 10 update for the Vivo V17. The update brings a lot of changes to the device. Although the UI is not close to stock Android, it is way better than it was before.

The report regarding the update was posted by a YouTube channel named HS Tech news. However, there is no confirmation that whether the update is beta or stable. For clarifying this, one of the users had a chat with customer support. 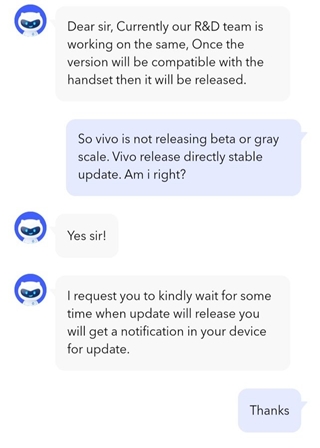 According to the chat, we can understand that there is no beta testing or greyscale test for the Android 10 update for the Vivo V17. So, we can assume that this update is the stable version of Android 10. The update is currently live for users in Indonesia and will be live for other parts of the world. The new update comes with version number “1.62.0” and weighs over 2.15GB.

Recently, Vivo has rolled out Funtouch OS for many of its smartphones. You can head over to that by clicking here. Stay tuned with us for more updates like this.