Apple has recently concluded the WWDC which is short for the World Wide Developer Conference and released the iOS 13 beta for testing by developers. I am personally not a huge fan of iPhones but, the operating system has got my attention this time around. Like all tech enthusiasts, I also watch these conferences be it of Apple or Google or any other companies because it lets you gain some important information and features what one has and what one should have. Here, I am not saying all is well with Apple iPhones either. There are several features that you could not do on an iPhone which you can easily do and have been doing since a long time on an Android Device.

But, I made a deep research on the features and that iOS 13 has brought along and straight away I thought, why can’t Android adopt those features? These features, in my opinion, are cool and increases the productivity of your device and in a  way make your device feature loaded. I might also be too late to point out these features as Google might have already started working on such features but, I love sharing my ideas and thoughts with the readers. So, without further ado, let us see the top iOS 13 features that I want on Android. 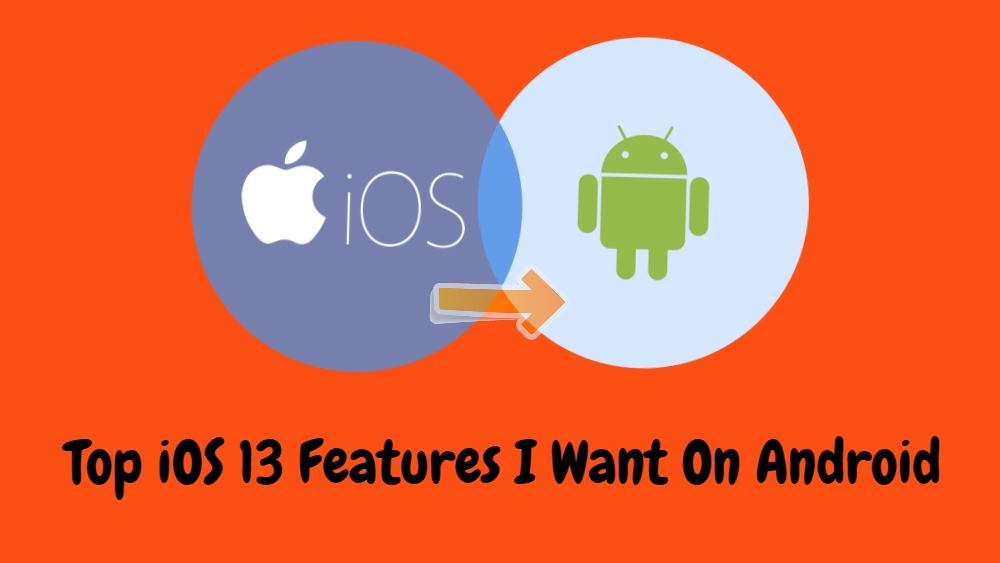 Let us face it, if you have watched the WWDC 2019 event, this feature might have crossed your mind that you need to have this on Android. Yes, there are multiple apps lying in the Play Store that lets you do that but, the native and stock video editing feature is just straight very basic and almost zero featured on Android. However, iOS 13 brings in a lot of features that as a video content creator, I would definitely love to have on my Android device. Moreover, you could only perform some simple operations like trimming, rotation, and stabilization option on stock Android video editors.

But, Apple has taken it a level up and has brought in a lot of features for the native video editing app;

One more interesting feature I loved was the easiness of getting the original video back by just tapping the back button or gesture swiping back to reset all the editing you have done back to original. But, on Google Photos, once you hit that back button it stores the edited video and there is no way you can get back your original video and this issue, I have faced a lot of time.

As the smartphone cameras have evolved and are getting better and better with each launch, the range and variety of capturing images have just changed. Previously, we were able to take great images or shots during a proper daylight setting or an abundance of light but now, the low light sensors and software processing for low light images has broadened our horizon. The Pixel 3 Night Sight or simply the Night Mode feature is the one that allows us to capture great quality images in low light.

However, this camera feature is still in its early days. We can still get noises due to the tiny sensors on our smartphones. But, Apple has seen through this issue of the users and they have included a native noise reduction feature on their stock photo editing application. You can easily perform the following operations, remove the graininess or the speckles of your low light images. Like I have said earlier that yes, you can do this with third-party applications on the Android smartphones but, it would be a nice touch to have on the native or stock photo editing app.

As mentioned earlier, Apple is not the only one to bring in features for smartphones for the first time. Android has also outnumbered Apple in terms of features that they have introduced first which was later adopted by Apple. The same is the case with the new “Sign in with Apple” feature. Like Google and Facebook, now you can sign in to apps or websites by just tapping the new “Sign in with Apple” feature and get access to that particular website or app. But, what has got my attention is the Hide My Email Feature. Now according to the official feature list of iOS 13 by Apple, it says;

From this what I have understood is that you do not need to create your email id and Apple will create a random one for you when you want to login to any website. This will help to protect the real email id that you do not want to share with anyone. Moreover, all the emails or other information from that website will be then forwarded to a preferred email id by you. A nice little feature that I would definitely love to have on Android smartphones.

Yes, again third-party apps will let you do this on your Android device but, again Apple has implemented this feature in their stock OS. This makes it one of the features that out of the box or a feature that natively should be present on your device and you should not need a third-party application to perform such tasks. But, why I want this feature right now is because of the below reason;

@davey_burke Here's the scrolling screenshots being "infeasible" story that was referenced at the Android fireside chat https://t.co/LUshCEitCX.

You seemed more enthusiastic about it than "infeasible" – would you like to reprioritize it in the tracker?

5. Use Find My Phone Offline

The feature of finding a lost mobile phone is one of the best features and a must-have feature on any smartphone. Thankfully, Android and Apple both have this feature up and running on their devices. But, with the iOS 13, Apple has just taken this feature to the next level by allowing us to search or find your iPhone even in the offline mode. Yes, on Android your smartphone needs to be online (connected to the internet) or should be switched ON in order to search for the phone and if it has switched off by the person who has your phone then, your smartphone is just gone!

Locate a missing device even if it’s not connected to Wi‑Fi or cellular using crowd‑sourced location. When you mark your device as missing and another Apple user’s device is nearby, it can detect your device’s Bluetooth signal and report its location to you. It’s completely anonymous and encrypted end‑to‑end, so everyone’s privacy is protected.

This feature might seem and hear familiar to something that we have on Android. you might think that his feature will let you know a detailed report about your battery life. But, there is something more with the iOS 13 update. Now, the optimized battery charge feature prolongs your battery health. Moreover, this feature is great for those who keep their smartphone charging at night and leave it until they wake up the next morning. Besides, you are also familiar with the fact that keeping your device on charge even after it is having 100% charge is not good for the health of the battery.

So, what this newly optimized battery feature does is that, when you enable it, your smartphone gets charged to about 80% at the normal speed and the rest 20% of your battery will be charged just before you wake up. Now your wake up time is learned by your Apple device based on your charging routine and pattern for every day. Awesome isn’t it? Here the official feature explanation by Apple;

A new option helps slow the rate of battery aging by reducing the time your iPhone spends fully charged. The iPhone uses on-device machine learning to understand your daily charging routine so it can wait to finish charging past 80% until you need to use it.

Now, this is the feature that I have personally wanted on my Android device for so long and for that matter on every smartphone out there that would make them really smart. This new accessibility update on iOS 13 brings a whole new level of how you would operate your smartphone via just your voice. And what’s more interesting, is that you can control your device with your voice without the need of any voice assistant like Siri, and you do not need an internet connection. You can entirely control your device without the need of internet connection or tapping here and there and no need of any voice assistant. This feature works flawlessly and with a stable update, it will get better with time.

So, there you have it from my side in this article. Yes, as mentioned earlier, Apple also needs to add many features from Android devices but, this topic we will discuss later. The iOS 13 definitely brings the more functionality and features that we can have on any smartphone and according to me these are the features and functions that I would want my Android device to have. Now, there may be some who might think why don’t I get the iPhone to use these features? The answer to this question is pretty simple is that I am an Android Guy and have used the iPhones in the past and couldn’t get used to that device.

Please let us know in the comments below if you liked this article and also, don’t forget to mention your favorite feature from the iOS 13 that you would like to have on Android.