Back in July, Samsung started rolling out the OneUI 2.1 on top of Android 10 for the Samsung Galaxy Tab A 8.0 along with the A 10.1. However, the update wasn’t pushed out globally, limited for a few regions. Initially, the brand was pushing updates for units sold in India. Now, the brand has started pushing the same in the US. 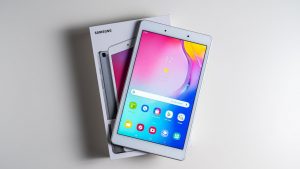 Interestingly, the brand has also listed the device in its official tracker. You can read about that by clicking here. As you know, the new OneUi 2.1 comes with a lot of changes over the previous versions. As usual, a user in Reddit has shared information about this. The new update comes with the version number “T290XXU3BTG1″ and also with the July 2020 security patch. Apart from this, some other Reddit users have also confirmed the same. The brand is rolling the update as OTA and will take some time to reach your device. Here, we have also got the detailed changelog about the same.

Accessibility
– High contrast keyboards and layouts for large text have been improved.

Camera
– Added the ability to edit the modes that appear at the bottom of the screen.
– Provided a More tab so you can quickly access hidden modes from the preview screen.

Internet
– Customize the quick menu to get instant access to the features you use the most.
– Get more information from the app bar.

My Files
– Added more filters you can use while searching to help you find things quickly.

Calculator
– Added speed and time units to the unit converter.

As of now, the brand is only rolling update for the LTE variants of these devices. That means the update for Wi-Fi variants will come later. However, there is no clarity about the version of OneUI i.e. whether OneUI 2.0 or OneUI 2.1. The update for the Samsung Galaxy A 10.1 comes with version number T515XXU4BTFK, and the other device i.e. the Galaxy A 8.0 comes with the build number i.e. P205DXU5BTFB. As said, we don’t know which OneUI is rolling out for these devices, and it comes with the July 2020 patch. From the last six months, Samsung has improved its speed of giving Android updates for its devices.

The Galaxy S4 and Galaxy S5e fall in the premium segment while the Galaxy Tab A10.1 and Galaxy A8.0 fall in the budget segment. So, we don’t expect Samsung to roll out OneUI 2.1 for its budget tablets. It is confirmed that the premium tablets are receiving OneUI 2.1 updates. As of now, there are no manual links for updating the device. Head over to Settings and tap on System Updates for downloading the update. If you have downloaded and installed please let us know it in the comments section or through the contact page.