And all these devices are listed in the second phase of MIUI 12 rollout. Interestingly, the Redmi 10X 4G aKa Redmi Note 9 received the MIUI 12 on top of Android 10. Some of the users of the Global Redmi Note 9 Pro aKa Indian Note 9 Pro Max asked about the MIUI 12 update in the Mi community.

The Mi Community moderator replied in this way:- 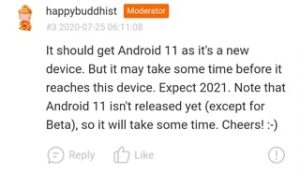 According to him, the device will also receive the Android 11 update. There is no surprise because Xiaomi used to push at least one major update for its devices. However, the brand will release the Android 11 only in 2021. Since Google hasn’t released the Android 11, we can’t guess the ETA. 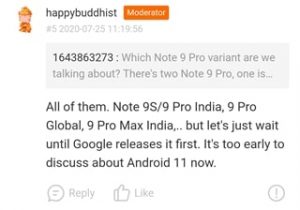 He has also confirmed that the other Redmi Note 9 devices that will also receive the Android 11 update. The list includes the Redmi Note 9S, Note 9 Pro  (Indian), Global Note 9 Pro, and the Indian Note 9 Pro Max. Stay tuned with us for more information.