Recently, there were some reports regarding the delay of MIUI 12 for the device. It was because that the pilot testing of MIUI 12 for the Note 7 Pro wasn’t finished. Now, the brand has started rolling out Android 10 for the Redmi Note 7.

The brand will roll out the MIUI 12 update for the device in the second phase of the rollout of MIUI 12. Recently, the brand has pushed the Android 10 for the Redmi 7a in a similar way. That means, the brand first rolled out MIUI 11 and then came by rolling out Android 10.

A few days before, the Indian Note 7 users received the Android 10 update. Now the brand has started rolling out the update for the Global units. The new update comes with the version number  MIUI 11.0.1.0 QFGMIXM and with the July 2020 security patch. Xiaomi has announced the update through its community. Apparently, a user has also shared the screenshot confirming that he received the update. Initially, the update was released in China, and as we said it came to India. An Indonesian user has also shared the screenshot by saying that he received the update. 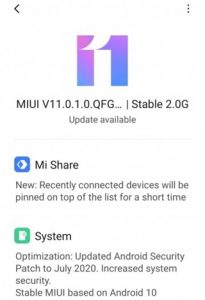 As usual, the update is rolling out as OTA and will take some time to reach your unit. We have the manual links for downloading the update.

As said, the MIUI 12 will rollout by the brand sometime soon. There are some rumors that they will roll out the update in August. But, we have an unofficial port of MIUI 12 for Redmi Note 7 if you want to try.

If you are new to flashing and bootloader unlock thing then it is better for you to wait for the official beta or stable MIUI 12 build.