Realme V3 was launched alongside the Realme X7 series . The Realme V3 comes as the cheapest 5G smartphone from the company and offers impressive specifications for the price. 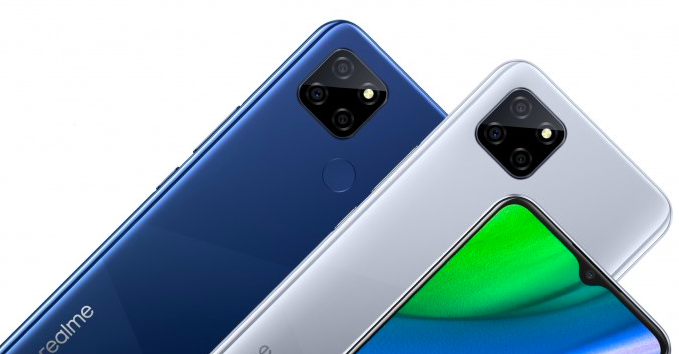 The Realme V3 phone features a 6.5-inch HD+ display which is big enough to play games and watch movies. It has a resolution of 720×1,600 pixels and it also has a 90Hz display which will provide a smooth and fast experience. Whereas Redmi Note 9 has a 6.53 inches display and but has a refresh rate of 60Hz. The 720p display at this price is a noticeable downside.

The Realme V3 has three cameras on the back; which setup includes a 13MP primary sensor, a 2MP macro sensor, and a 2MP depth sensor. The camera is nothing out of the ordinary, infact it’s pretty much the same camera setup found on other Realme devices. On the front, there is an 8MP sensor, housed in the notch for selfies.

The MediaTek Dimensity 720 powers the Realme V3, which is fairly new and a budget 5G SOC. It is a great processor at this price, and it is faster and better than the MediaTek Helio G85 processor in Note 9. The Mediatek 720 is 7nm chip and makes the Realme V3 one of the cheapest phone with a 7nm chip. The SOC is expected to be on par with other mid range offerings from Qualcomm. The Realme V3 comes with an excellent battery life thanks to the 5000mAh battery with a HD+ display.  It also supports 18W charging and come with it out of the box. This battery is big enough for all your work, gaming, and watching movies. The Redmi Note 9 had a slightly bigger battery of 5020mAh.