Back in 2017, Razer launched its first gaming smartphone in the world. The device was named as the world’s first true gaming device. It had an impressive 120Hz screen which is the most interesting point for gamers. And in 2018, the brand launched its Razer Phone 2. It’d been almost two years since the launch of the device. There are no reports of the launch of Razer Phone 3.

Back in 2019, Razer dismissed some members of the smartphone workforce. The company promised two major Android updates for its smartphones. The Razer Phone 2 received its first major update i.e. Android 9 Pie. Now, Razer is trying hard to keep its promise. Back in May, the AT&T Razer 2 received the May 2020 security patch. 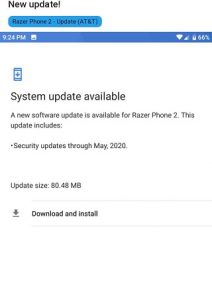 The original Razer Phone received two major updates i.e. Android 8 Oreo & Android 9 Pie. So, the users of the latter are waiting for their Android 10 update. Many users took out to Twitter regarding the update. But the brand hasn’t responded to anything till date. Back in March 2020, there were some reports regarding the Android 10 update for the Razer Phone 2. 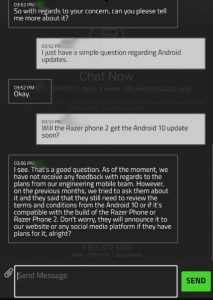 As you can see in the above screenshots, later there were no reports of the Android 10 update. Some of the users took out Reddit that whether they can install custom ROM in their smartphone.