Google, the creator of Android is bringing new flagship Pixel devices with each version of Android and this time it is no different. It is reported that the Pixel 5 and Pixel 5 XL will be launched with Snapdragon 765G with the release of Android 11 which is not a flagship variant but seems to be mid-range phones. 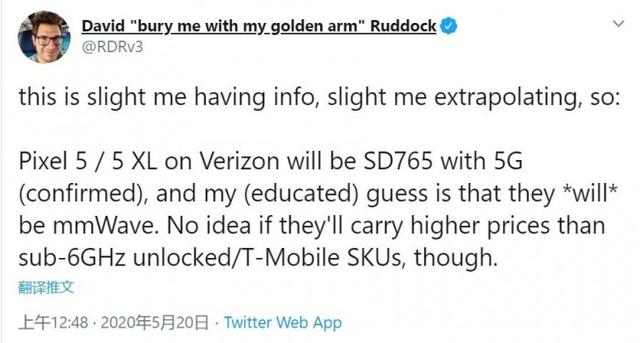 It seems to be an exception this time on the chipset front of these Pixel 5 series of phones.

It is confirmed by David Ruddock on twitter about this information.

this is slight me having info, slight me extrapolating, so:

Pixel 5 / 5 XL on Verizon will be SD765 with 5G (confirmed), and my (educated) guess is that they *will* be mmWave. No idea if they'll carry higher prices than sub-6GHz unlocked/T-Mobile SKUs, though.

In addition, Google suggested in a survey report that the Google Pixel 5 was priced at $699.

Unfortunately, other details about the Pixel 5 or the 5 XL besides the processor are not known at this moment. The previous Android 11 code hinted that the Google Pixel 5 series will have support for reverse wireless charging.

But things may change when the phones will actually be released in October around the new Android 11 launch.

That’s all for now! Stay tuned for more of such exciting information related to Android and Android phones.