Today, OnePlus has launched it’s Oxygen OS 11 which comes with a lot of new features. The brand has also revealed its Chinese version of Oxygen OS i.e. Hydrogen OS. The brand had almost three developer previews of the same. The same is rolling out for the latest OnePlus 8 and 8 Pro. As you guessed, all these developer previews were built on top of the Android 11 Beta update. 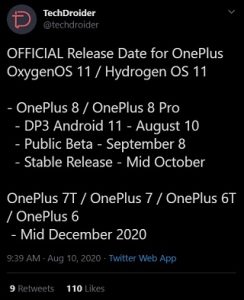 The brand has revealed more details of the Open Beta in the event. Thanks to TechDroider, he has also shared some pieces of information regarding the Open Beta update. As per him, the OnePlus 8 and 8 Pro will receive the Open Beta on September 8 which also be on top of Android 11 Beta. The stable update will be rolled out somewhere in Mid October.

The older OnePlus 6, 6T, 7, and 7T will receive the new update in mid-December. He has also shared a tweet that contains the features which will be present in Hydrogen OS 11.

We also have the LineageOS 18 for OnePlus 7 Pro available which is an Android 11 custom ROM. For other latest updates you can also visit this Android 11 download page.

The new version comes with some cool features like Always-on Display which the users have been requesting since OnePlus started using AMOLED screens. For more details about the same, you can head over to our article by clicking here. We have a dedicated team for bringing these kinds of articles for you guys.