OnePlus was one of the few OEMs to push the Android 11 updates for its devices. The new Oxygen OS 11 has awesome features compared to the predecessor. Currently, both the OnePlus 8 and OnePlus 8 Pro received the public beta updates from the brand. After the update, there were many issues for both the devices. Because these are beta updates and it’s expected to come with bugs. Previously, we had reported the issue related to Google Pay of the OnePlus 8 Pro. Now a report has appeared, which discusses the new issues of the device. Read till the end, because we will explain more about the issue below.

Interestingly, the new Oxygen OS 11 comes with the ring light feature which will light around the front camera. The new bug in which the user’s report is that ‘Swipe from corner’ gesture feature of Google Assistant. This feature doesn’t work on both the OnePlus 8 and OnePlus 8 Pro. We have attached a screenshot of the same. 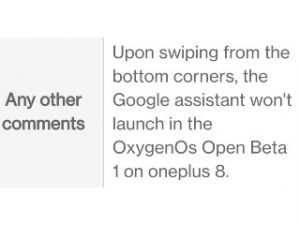 A couple of other users has also reported the same issue. OnePlus community moderator has replied that they will be fixing the same.

We have made a note of this and our developer team is currently working on this. We will keep you posted regarding the further updates. We appreciate your support and patience in this regard. We will update when OnePlus fix the same issue. So stay tuned with us for more updates like these.