Oxygen OS 11 (Android 11) will come with support for AOD!

OnePlus’s UI which is the Oxygen OS is the favorite skin of many users including me. The reason behind this is that it is almost close to Stock Android. Apart from this, it also comes with a lot of customizations, and it is one of the optimized UI out there. In fact, there is no bloatware in the Oxygen OS, and as said gives a feel almost to Google’s Pixel devices. OnePlus is a brand that takes feedback from users and acts accordingly.

Interestingly, OnePlus is the only brand that provides three major Android updates for its devices. No other brand in the industry except Google which provides three major updates. Even the Android one devices out there gets only two major updates. Since OnePlus 3, the brand has switched into AMOLED displays from normal LCD displays. Since then, the users are requesting OnePlus to provide support for Always-on-Display (AOD). To date, the Oxygen OS doesn’t have the same feature.

The same feature is available in devices of OEMs like Samsung, Xiaomi, LG, Realme, and OPPO. Xiaomi has the best customization for the AOD, and the latest MIUI 12 has a ton of styles. The wait is over, and OnePlus will roll out the feature with the Android 11. The report comes from OnePlus’s CEO i.e. Pete Lau. According to his latest tweet, AOD will be present in Oxygen OS 11 on top of Android 11. 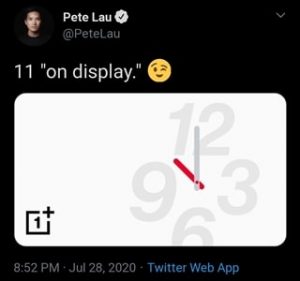 A big shout to OnePlus for including AOD with the upcoming updates. Earlier, there were some leaks regarding the same. So, all the devices which are eligible for the Android 11 will also receive the feature. Sadly devices like OnePlus 3, 3T, 5, and 5T will not receive the same. Since, these devices are not eligible for the Android 11 update. Stay tuned with us for more information like these.