A working mod of Google Camera 7.0 or GCam for OnePlus 6 – 6T running on Android 10 or Android Pie is now available to download which is built by TInNeun. This build of GCam 7.0 for OnePlus 6 – 6T has all the basic features working.

Astrophotography feature was introduced in Google Camera 7.0, hence you get the same on this GCam for OnePlus 6 – 6T, in addition, you get other features such as HDR+, ZSL, Super Res Zoom, Night Sight, Time lapse etc.

Google Camera 7.0 is compatible with Android Pie and Android 10. Hence the same goes for this GCam 7.0 for OnePlus 6 – 6T.

How to Install Google Camera on OnePlus 6 – 6T?

Google Camera 7.0 comes with Astrophotography mode by default, so there is no settings that needs to be enabled. But to capture photos in astro photography mode, certain conditions to be met after which the mode is enabled automatically.

Following conditions must be met to capture in Astrophotography mode (known as cuttlefish in Google Camera ports like this):
– It can be enabled on Night Sight mode (only)
– The phone must be kept static (use a tripod or keep the phone somewhere to keep it static)
– There must be low light condition
– It may take few seconds for this mode to come up when the above conditions are met

See the below screenshots to get an idea how to know if it is shooting in Astrophotography mode in GCam 7.0? 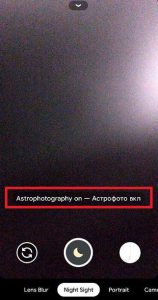 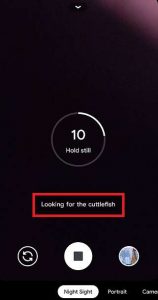 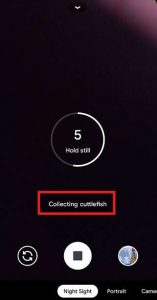 When the display shows something like “Astrophotography is on” or “Phone is steady” or “Capturing cuttlefish” while capturing photo in Night Sight mode, then most likely it is shooting in astrophotography mode otherwise not.
When I kept the phone static in front of a good light source, the Astrophotography mode did not turn on no matter how longer I waited.
So, make sure it is a low light environment.

It is possible that this is not the only Google camera mod that works on OnePlus 6 – 6T. There could be other GCam mods out there that may just work fine on the phone.

That’s all for the OnePlus 6 – 6T’s Google camera 7.0 with astrophotography mode enabled. Stay tuned to this article for more updates on getting a stable or other latest updates of GCam for OnePlus 6 – 6T.

Visit the following link for OnePlus 6 and OnePlus 6T updates on other Google Camera, Custom ROMs and all other device specific topics.
16MPIMX519OnePlus 6OnePlus 6TSnapdragon 845TInNeun

GCam or Google Camera for Zenfone …