Mi A2 will not receive official Android 11 update!

Most of the OEM’s out there have almost finished pushing Android 10 updates for its smartphones. Now the brands are in the process of deciding whether to give Android 11 update for its all smartphones.

Before moving into the details on this topic, I would like to bring it to your notice that the Mi A2 Android update is available from custom ROMs, if anyone wants to try it out!.

As you all know, the “A” series from Xiaomi was quite popular because it’d pure Stock Android. All the devices from this series were under the Android one program too. So, all these devices will receive two major Android updates. Back in 2018, Xiaomi launched its second “A” series device i.e. the Xiaomi Mi A2.

The device came with Android 8.1 and later was given two major Android updates. This includes Android 9 Pie and Android 10 update. Since it received two major updates users were in confusion about whether it will receive any further major updates.

This led one of them to ask in the Mi Community, and a moderator has replied that the device will not receive any further major updates. 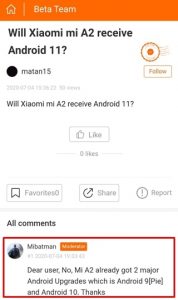 A few years before, Google changed its Android one policy. Earlier, Android One devices would receive three major Android updates, but Google has cut shorted it into two years now. So, this decision was a sad moment for the users of Android one programs.

In relation to this, Redmi Note 8 Pro which was released in 2019 with Android 9 Pie will be updated to Android 10 buy will not be receive the Android 11 update. Because the Redmi series of phones get only one major OS update.

It is clear that Xiaomi isn’t interested in giving Android updates to its budget smartphones. While the brand will give UI updated for two to three years.

But that is not the end of the story. We have got your back here. As always many developers are working to bring the latest Android. Just like the lineageOS 17.1 for Mi A2 based on Android 10 was released on September 11 2019, which is quite early in comparison to the official release of Android 10.

Having said that if there will be such an update coming for the phone, you will surely find either in the LineageOS 18 page or the Android 11 download page or other respective Android 11 custom ROM page.

That’s all for now! Stay tuned keep visiting the website for more updates on Mi A2 and more updates like this!