LineageOS 17.1 / 17 for Nexus 6p is now available to download and install from an unofficial build. This step by step guide explains how to install the same on Nexus 6p.

This Nexus 6p LineageOS 17.1 / 17 build is brought to you by developer PixelBoot. DISCLAIMER:
This is an initial build of LineageOS 17.1 and 17 for Nexus 6p, which may have many bugs. Flash at your own risk.
You are the only person making changes to your phone; neither the developer nor I can be held responsible for the mistakes done by you.
Installing a custom ROM on Nexus 6p requires an unlock bootloader on Nexus 6p, which will delete all your data. Before proceeding further you may consider backup all data on the phone.

The LineageOS 17 has been updated to the latest branch LineageOS 17.1. The Nexus 6p LineageOS 17 build will most likely have an outdated security patch.

It is strongly recommended that you install the Nexus 6p LineageOS 17.1 ROM build.

How to Install LineageOS 17.x on Nexus 6p?


Following are the two sub-sections of this Nexus 6p LineageOS 17.1 / 17 update guide:

This ROM update process requires few guides to be followed and few files to be downloaded. Everything referred in the below guide is provided in the above downloads section.

Upgrading from earlier version of LineageOS 17.1 / 17

Some Screenshots of LineageOS 17.1 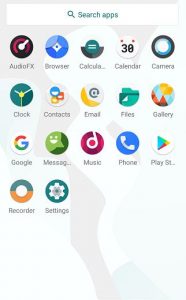 After installing LineageOS 17.1 / 17 on Nexus 6p you may want to install Google Camera (GCam) or enable ROOT access on your phone and here is how you can do that:
– LineageOS 17.1 Rooting guide

GCam 7.x version is compatible with LineageOS 17.1 or any Android 10 ROM in general.
In case you won’t get your device in the above lists, you can always look into the big list of Google Camera for Android 10 (this page contains a huge list of GCam for all available devices)

If there is no ROOT access for some reason even after installing the LineageOS SU binary, then you can try SuperSU Zip to enable ROOT access.

Follow the links to get other Android 10 builds such as: Lineage OS 17.1 and Android 10 Download for supported devices.

Stay tuned or Subscribe to the Nexus 6p (angler) For other Android 10, Android Oreo ROMs, Nougat ROMs, or other ROMs and all other device specific topics.
Android 10LineageOS 17Nexus 6pPixelBoot

Advertisement Create, edit and collaborate with …

Advertisement Create, edit and collaborate with …

Boost your browsing experience with Boost …

Google Fi is a phone plan …