A working mod of Google Camera 7.2 or GCam for Moto X4 running on Android 10 or Android Pie is now available to download which is built by onFire. The key feature on this build of GCam 7.2 for Moto X4 includes 32x Zoom and Astrophotography mode.

Astrophotography feature was introduced in Google Camera 7, hence you get the same on this GCam 7.2 for Moto X4, in addition, you get other features such as HDR+, ZSL, Super Res Zoom, Night Sight, Slow motion, Time lapse etc.

Google Camera 7.2 is compatible with Android Pie and Android 10. Hence the same goes for this GCam 7.2 for Moto X4.

Following is the download link to the Gcam APK for Moto X4:
Google Camera 7.2 for Moto X4 (with 32x Zoom, Night sight, and Astrophotography mode)

How to Install Google Camera on Moto X4?

Prevent portrait images to be saved in a new folder

Portrait mode creates a separate folder. To prevent this, change the below setting:
Go to Settings > Advanced (under custom settings) > Enable Save to /DCIM/Camera

Enable the following setting to make the Astrophotography mode available all the time.
Go to Settings > Advanced (under custom settings) > Toggle the Force astrophotography to enable 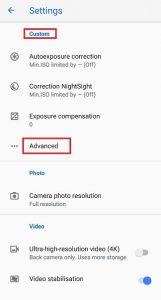 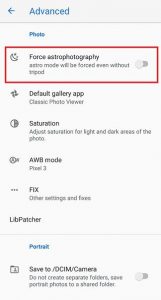 There is no specific setting that has to be enabled to achieve get high res zoom. Just use the zoom slider to get the maximum zoom the phone supports.

It is possible that this is not the only Google camera mod that works on Moto X4. There could be other GCam mods out there that may just work fine on the phone.

That’s all for the Moto X4’s Google camera 7.2 with astrophotography mode enabled. Stay tuned to this article for more updates on getting a stable or other latest updates of GCam for Moto X4.

Visit the following link for Moto X4 updates on other Google Camera, Custom ROMs and all other device specific topics.
12MPMoto X4onFireS5K2L7Snapdragon 630

GCam or Google Camera for Nubia …