MIUI 12 was unveiled by the brand in April 2020 in an event conducted in China. The brand has started rolling out the MIUI 12 update for its Mi 9 SE in China. Usually, China variant gets update first which is followed by the Global variant(s).

Interestingly, here the things are different because the Global variant got the MIUI 12 update first. The new update comes with the version number  V12.0.2.0.QFBCNXM. Thanks to IThome for sharing the details of the update. According to the screenshot shared by them, the update comes with a size of 833MB. There are certain reports that the update has still some bugs which are yet to fix.

As usual, the MIUI 12 comes with a lot of changes for the device. Speaking about MI 9 SE, it is a lower version of the flagship MI 9 Series. It has a 5.97-inch AMOLED display, Snapdragon 712 SoC, 6GB of RAM, 64 or 128GB of storage, 48MP quad-rear cameras, in-display fingerprint scanner, and many more. This year, Xiaomi has launched MI 10 Lite, and MI 10 Lite Zoom in the place of Mi 9 SE. Xiaomi will soon launch Mi Note 10 Lite as MI 10i in India. 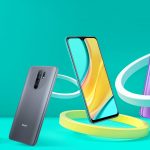