LG has started rolling out Android 10 update for the T-Mobile LG Stylo 5. Earlier, the brand has released the updates for the Metro, and Verizon’s networks. LG has one of the worst reputation for providing Android updates. Some other LG devices have also received the Android 10 update. 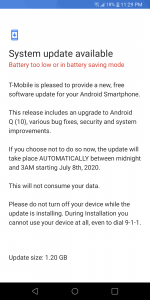 The Android 10 update for LG Stylo 5 was posted by a user in Reddit. He has also shared a screenshot of the same, and it reveals that the update weighs 1.20GB. However, the changelog hasn’t been updated anywhere. The update will bring common Android 10 features like system-wide dark mode, Digital Well-being, live captions, navigation gestures, new animations, and many more. The update is rolling out on top of LG UX 9.0.

As you know, the update will roll out in batches and will hit the T-Mobile LG Stylo 5 devices as OTA. Some of you may guys may haven’t received any notification regarding the update. You can go to Settings, then System, and tap on Update Center, and finally click on Software updates for checking updates. If the update is available, you can download, and install the same. Don’t worry, if the update isn’t available, it will hit you soon.