Generally, LG is one of the slowest OEMs to push major Android updates. Also, it is worth noting that LG’s UI was not that great. The main USP of their smartphones was the hardware capability and its multi-functionality. Back in 2019, LG launched its LG G8X Thinq with dual-screens in various countries. The most attractive feature was the dual-screens which were attached in a case instead of going with the regular fold design. As you know, the device was launched with Android 9 Pie out of the box. The brand promised that the Android 10 update will roll out in Q2 of 2020.

On May 15, a Reddit user shared an image by saying that the Sprint variant of LG G8X Thinq has received the LG UX 9.0 update on top of Android 10. As usual, the update brings the latest features like improved night mode, much darker wallpapers, fresh icons and colors, fresh & smoother animations, full-screen gestures, and many others.

Several users confirmed the update of Sprint G8X Thinq. What’s more interesting was the second screen can be turned on even if is in the folded state. 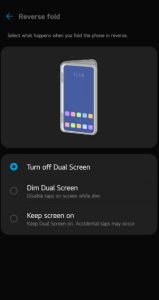 The brand has also confirmed the update, and later it was available for the unlocked variants too. Later on May 28, the update was pushed for the LG G8X Thinq units of Telus (a carrier in Canada).

Earlier on June 3, the update was rolled out in Brazil with the version number “V20a.” This was also shared by a user in Reddit with an image.

Soon after the rollout in Brazil, the update was live for the units of AT&T in the US. However, initially, the update was pushed through the LG Bridge software, and later as OTA.

Finally, on June 3, the brand has started rolling out LG UX 9.0 on top of Android 10 for the users in Germany too. A Reddit user has shared the screenshot which confirms this.

The device will receive Android 11 in the future. Generally, LG gives two major updates for its flagship smartphones. However, the brand will be slow to push the update because it doesn’t have a good track of pushing updates.