Recently all of the LG G3 variants have got OFFICIAL LineageOS 15.1 update which are maintained by developer HardStyl3r and firebird11.

I know that these updates are late when we already have Android Pie launched couple of quarters ago and also we have many Lineage OS 16 UNOFFICIAL update and Android Pie Download available for many devices.

If you are curious, following are the downloads and update guide etc. 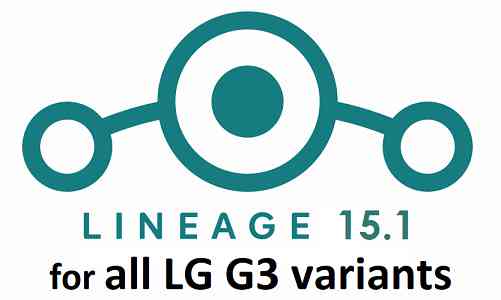 How to update these LG G3 OFFICIAL LineageOS 15.1 build:

To update your LG G3 variant to LineageOS 15.1 you must have unlocked bootloader and a TWRP recovery installed.

Optionally you can install GApps or microG to get app store and other apps.

I will add LineageOS 15.1 update guide for all of the LG G3 phones individually and give the links here in a later time.

Well, I have already pointed out few of the key differences between OFFICIAL and UNOFFICIAL LineageOS builds out of which, periodic updates, BUG fixes etc. are key to note.

Having an OFFICIAL LineageOS 15.1 means most of the key hardware components would be working out of the box.

How to update to latest build of OFFICIAL LineageOS 15.1 for LG G3 phone:

OFFICIAL LineageOS 15.1 supported device will get OTA updates for latest NIGHTLY builds.
NIGHTLY builds come once in a week and you will get a notification on your phone (if I am not wrong).

Go to the update and it will automatically install the update using existing TWRP recovery on your phone.