A few days before, Asus launched its new gaming smartphone i.e. the Asus Rog Phone 3. The device was one of the four devices which came with the new Snapdragon 865+ SoC. The device comes with powerful specifications that satisfy the extreme gamer’s requirements. The brand has also priced the device in an attractive manner. It has several extra features for gamers. The device is running on a UI that is similar to Stock Android on top of Android 10.

As we said, since it is close to Stock Android, it doesn’t have the extra features which the custom UI skins provide us. For bypassing this, people prefer to install custom ROM on their devices. For this, we need to unlock bootloader and developers need the Kernel Source code. Interestingly, Asus has made the Kernel Source Code public. And, the brand has also enabled the bootloader to unlock for the Asus Rog Phone 3. 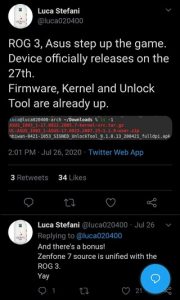 As you can see in the tweet by Lucas Stefani (LineageOS director), the Source Code is unified with that of the upcoming Zenfone 7. Further, if you need to download the Kernel Source Code, you can download it from below.