iQOO Z1 to launch on May 19; hands-on image leaked!

Earlier we reported that iQOO would be launching the first MediaTek Dimensity 1000+ powered device. It was announced by MediaTek, after the launch of Dimensity 1000+. Later, it was confirmed by the brand. However, they didn’t reveal any specifications or naming of the smartphone. Soon after that, a leaker suggested that it will be naming as iQOO Z1.

However, earlier today the brand has confirmed that the device will be naming as iQOO Z1, and will be launching on May 19. The Z1 is the first device from the brand under the “Z” series. The brand has also shared a teaser of the device which reveals the display design. It shows that it will sport a single punch hole to the right, and massive refresh rate of 144Hz. Further, it also adds that it will be 5G capable. All these were confirmed since MediaTek Dimensity 1000+ is capable of these things. They had also shared a teaser video, which also doesn’t reveal anything. Apparently, a real-world image of the device has been shared by a famous tipster from China. Many of you may know him, Digital Chat Station.  As shown in the teaser, the image also shows a single punch hole to the right. It has slim bezels to the sides, and slightly thick to the bottom. To the right, it sports the power button, which also comes as the fingerprint scanner. 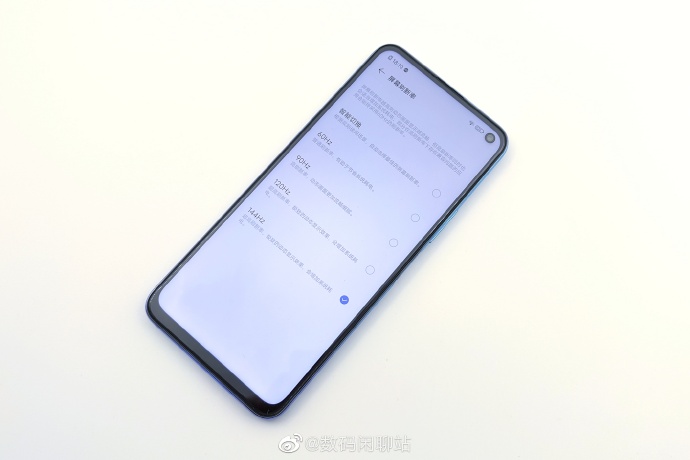 Further, the second image shows to select the refresh rate. It shows options such as 60Hz, 90Hz, 120Hz and 144Hz. So, it will be coming with an LCD screen just like the iQOO Neo 3. In connection with this, a V1986A was approved by 3C authority of China. It reveals that the handset is a 5G-ready device, and will come with a 44W rapid charger. It seems that the V1986A will be the upcoming Vivo iQOO Z1.