Huawei is struggling with its smartphones in countries other than China due to the lack of Google Mobile Services. Although Huawei smartphones now come with its own Huawei Mobile Services it doesn’t have the support of everything which GMS supports. Yesterday, the brand has started rolling out EMUI 10.1 for the Huawei Mate Xs and Mate X. Previously, we have reported the list of 13 devices that are eligible for the EMUI 10.1 update. 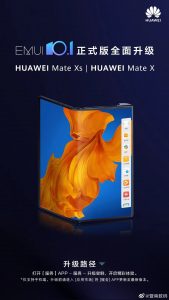 Both these foldable smartphones are receiving the stable EMUI 10.1 update in their home country i.e. China. Huawei Mate X was the first foldable smartphone of the brand which was launched with EMUI 9.1 on top of Android 9 Pie. The latter, i.e. the Huawei Mate Xs was released with EMUI 10 on top of Android 10. The latest EMUI 10.1 was launched with the Huawei P40 series.

The new update weighs over 4GB for the Mate Xs, and users of both the smartphones have confirmed it through Weibo. Compared to EMUI 10, the new version doesn’t come with a whole lot of changes, but it improves the overall performance of the devices. It includes new themes and Huawei Share which is similar to Airdrop & Nearby Share by Google. Huawei will release Android 11 for its smartphones in Q3 of 2020. Most of Huawei devices are updated to Android 10 now.