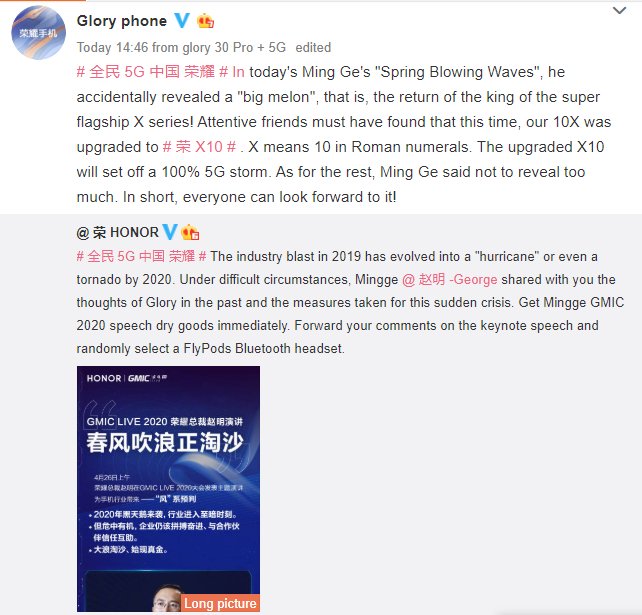 Ming said that if the Honor 30S which came with the Kirin 820 5G chipset has set off a wave of 5G popularity in China. The whole new X-series can set off a 5G storm. Further, he tells us that each generation of the Honor’s X-series have been a massive hit in the home market. The company has been managing to sell millions of unit of each X-series smartphones. Last week, the brand itself confirmed that the sales of the Honor 9X had crossed 10 million units in China.

However, he has not clarified why they’re changing the name to X10 instead of the 10X. There are rumours that this was done in order to prevent consumers from getting confused it with the upcoming Redmi 10X 4G smartphone. He also didn’t confirm the existence of the X10 Pro nor shared any specifications of the X10. But speculations around the web suggest that the X10 will sport the Kirin 820 5G SoC. While the X10 Pro could sport the Kirin 985 SoC, and it would be launching soon. The new Honor X10 series would be launching in May, and the pricing would be under 2000 Yuan.

According to the Chinese tipster, the X10 will feature a 6.63-inch IPS LCD with FHD+ resolution (1080 x 2400 pixels), and with a massive 120Hz refresh rate. Just like other smartphones, it would come with a side-mounted fingerprint scanner. It will pack a 4,200mAh battery with support for 22.5W fast charging tech.