Huawei announced a whole new platform for its smartphones soon after the trade ban by the American Govt. Due to the ban, American companies are not allowed to trade with Huawei. Even though there is a ban by the US, sales in China don’t effects because China has already banned Google and other things there. They don’t need Google Mobile Services. The sales in other parts of the world are low due to the lack of Google Mobile Services. To overcome this the brand announced a whole new OS in August 2019, i.e. the Harmony OS. Initially, the OS was developed for replacing Android OS in Huawei & Honor devices. But now, it seems that the Harmony OS is developed for its IoT devices. Considering that even after a year of the launch of the OS, there are no smartphones with the same. A Reddit user has shared the roadmap of Huawei IoT devices that will be receiving the new OS. As you can see in the roadmap, Huawei is planning to bring their Harmony OS into cars, watches, and computers with the new version i.e. the 2.0. 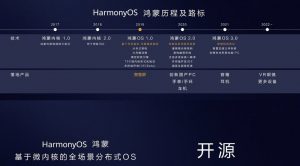 The new version of the OS will be unveiled by the company on September 11 when the brand will host its Huawei Developer Conference. However, as of now, the brand is not planning to implement the new OS to its smartphones. As you can see, there are no smartphones mentioned in the roadmap. It is clear that the brand will stick with Android for at least three years.

It will adapt to all the IoT devices!

In 2021, the OS will adapt to smart speakers and headphones, and in 2020 they will adapt VR glasses and other VR devices into the same OS. A few months before, it was reported that Huawei is all set to enter the PC market. Interestingly this time the brand will come with its own HiSilicon Kunpeng processors. It was also reported that these devices will run on Harmony OS 2.0.

Huawei has filed a no of trademarks like HarmonyOS, HarmonyOS Connected, HarmonyOS Linked, and more. This gives us an idea that the brand is aiming to expand the compatibility of the new OS. The brand has started promoting the OS as a single OS which will cover everything.

The brand also adds that it is engineered to communicate openly regardless of the device, and by using a microkernel system, and is secure as well. As you know, the new version of OS will be announced in September this year, there is no ETA when the products will be available on the market. In connection with this, Huawei will launch the new EMUI 11 in the same event. You can read about that by clicking here.