What are the Hardware Specs of Galaxy Note 10 Lite?

Below is a brief description of the major hardware specifications of the Galaxy Note 10, pricing details and all other relevant information. 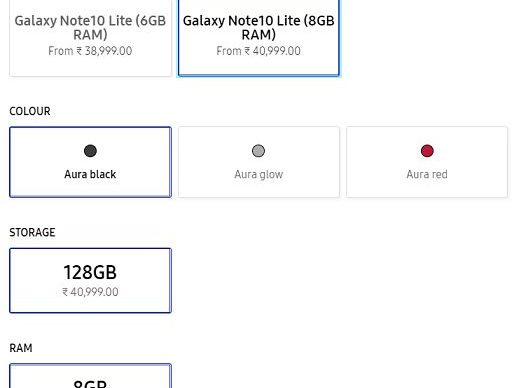 What is the Price of Galaxy Note 10 Lite in India?

Samsung’s Galaxy Note series is very well known for its flagship spec, productivity features and the unique S-Pen. For flagship phones majority of customers are choosing price to value Android phones from OEMs like: OnePlus, Xiaomi, Oppo etc. but not the Galaxy Note series of phones. But with the flagship hardware of Galaxy Note 10 Lite and the competitive pricing definitely Samsung has challenged the other OEMs in this segment as well.

How Come a Galaxy Note phone can cost so less?

The first question that came to my mind was this!
Well, the answer partially lies on the chipset used. The Exynos 9810 which comes on the Galaxy Note 10 Lite is at least a 2 years old chipset which was introduced with Galaxy S9 in February 2018.
Also, the competitive priced market segment which is currently dominated by OnePlus, Xiaomi and other OEMs might have pushed Samsung to play in this arena as well.

When the Galaxy Note 10 Lite will be Available in India?

The phone was announced in India on 21st January and can be pre-booked on Samsung Shop online and/or Amazon India, Flipkart India and Paytm. As I went on pre-book the phone, it showed me that the delivery starts on 3rd February 2020 and it will be delivered in 2 to 4 business days.

Where to buy the Galaxy Note 10 Lite

The phone will be available on online Samsung Shop, Amazon, Flipkart and Paytm.

My opinion on the Galaxy Note 10 Lite

So, the basic question is: should you buy the Galaxy Note 10 or wait for the Mi 10, or the OnePlus 8 or other flagship phones to come? In my opinion, NO other phone on earth can provide a flagship phone with the S-Pen features with this price to value ratio. The triple 12MP camera setup, the Super AMOLED infinity-O-display, the RAM size, internal storage, the price and pretty much everything makes the Galaxy Note 10 Lite unique in this segment. Especially, with the pricing it becomes a rare combination to get a phone like this anywhere, at least right now!

That’s all from me. Let me know what you think of the Galaxy note 10 Lite in the comments section and just stay tuned for more phones and all other relevant topics.