Samsung has a track record of giving at least two major updates for its smartphones. A few weeks before, the brand has rolled out the Android 10 update for its successor i.e. the Galaxy M10s. There were no reports when exactly the brand will roll out the update for the M10. The information comes from the Turkey website of Samsung.

According to the brand, they will release the update for Samsung Galaxy M10 in August, and it is in the testing phase. The update for the other regions may arrive later. Please do note that the update can come between August & September. There is no exact ETA for the same. 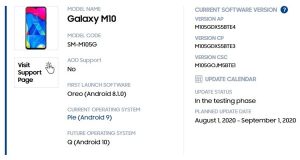 Samsung is doing a great thing by providing new updates even to its older devices. Most of the brands used to skip their old budget devices. We hope that other brands will too follow this. Stay tuned with us for more information like these.