Earlier, it’d received the OneUI 1.0 (Android 9 Pie) update. The new Android 10 will be the final major Android update for the smartphone. Back in June, there were some reports regarding the update of Samsung Galaxy J7 Duo. In connection with this, yesterday the brand has pushed the updates for the Galaxy Tab A 10.5 & Galaxy J8. The update for Galaxy J7 Duo is rolling out in India and comes with the July security patch. Further, the update comes with version no J720FDDU6CTG2/ J720FODM6CTG2/ J720FXXU6CTF5 and it weighs over 1.2GB. Some of the users have already shared the screenshot of the update for confirming the release of the update. As you know, the update is rolling out as OTA and will take some time to reach your device. 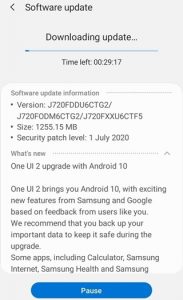 The update for other regions will also be rolled out soon, and there is no ETA for the same. In case, if you can’t wait for the OTA, you can download it manually, and then install.

Stay tuned with us for more updates like this. Also please let us know if you have updated your device into Android 10.