There are several restrictions by the US Govt on Huawei. Even though the brand is no longer access to Google services, it comes with one of the best Android smartphones. The brand has almost pushed Android 10 updates for its every smartphone that was released from 2017. It’d been 8 years since the launch of EMUI. The current version of EMUI is 10.1, and the brand is planning to release EMUI 11, and Magic UI 4.0 on top of Android 10.

Recently the brand has started beta program of EMUI 10.1 for its older devices like Nova 5T, Enjoy 10s, and Honor 20 Lite. The hardware on the Huawei P40 series is one of the best specifications for a flagship out there. In fact, Huawei has managed to sell a large no of its smartphones globally. We have already reported the compatible devices for which Android 11 based EMUI 11 will arrive. But people believe only when it comes from either people working in the company. So, be it!

A few days before Wang Chenglu, President of Huawei Consumer Business Software confirmed that the stable EMUI 11 will be rolling out in Q3 of 2020. Further, he said that the upcoming version will be based on distributed technology which was introduced in EMUI. It will enhance application performance in various scenarios and improve overall user experience.

However, he didn’t mention the exact date when will EMUI 11 will be launched. It seems that it will be launched at Huawei Developer Conference 2020 (HDC 20) Consumer event which happens in August. Further, the internal testing of the same will happen before the launch of stable version. 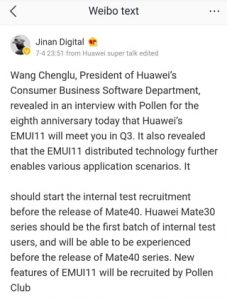 The reports on the web suggest that the Mate 30 series would be the first devices to get the same. The beta testing will start before the launch of the Huawei Mate 40 series. There are some rumors that the Huawei P40 series will also receive the beta version of EMUI 11. The new version of EMUI will come with all the Android 11 features which also includes improved privacy, and user data security. Anyway, let’s wait for the beta release so that we will get some more information about the same.