Asus seldom cares about its smartphones since the brand launches one or two devices in the year. However, there is one segment where they used to release phones every year. Yes, it’s the “Rog” series where the brand used to launch smartphones. The brand has a dedicated team for the same. They have also laptops under the “Rog” branding. Back in 2019, the brand unveiled the Asus Rog Phone 2 which came with stunning specifications. Unlike the Rog Phone 1 which had massive pricing in India, Rog 2 was priced very aggressively.

You guys may know that these are specially made for serving long gaming sessions. Their target is also towards those types of buyers. The Rog Phone 2 came with the Snapdragon 855+ SoC, Android 9 (Stock Android), and a massive display with a 120Hz refresh rate. Asus has rolled out the Android 10 update for the device in March 2020.

Later, the brand has been pushing monthly security updates which have fixed almost every issue of the phones. To date, the monthly updates have fixed third party launchers, Armoury Crate, and they’ve even fixed VoLTE. But, the users of the device is facing some issues that are related to hardware. The phone is meant to serve long-term gaming sessions, but it doesn’t serve now.

A user recently took out to ZenTalks that his device is turning off while charging. Also, his device shows a black screen while playing Pubg. Although, the game still continues to work. He explicitly says that he bought the device for gaming purposes, and it doesn’t serve that. The user asked the brand for providing updates in order to fix these issues. There are a lot of comments in the ZenTalks like this. 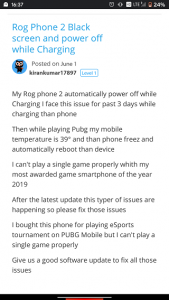 As said users thought it was related to software, but the moderator has confirmed that it’s related to Hardware. According to him, the affected users are requested to contact Asus for hardware fixes. This was the reply from Moderator

I had another user with a very similar issue. The fix is hardware repair. You need to contact ASUS support

By hearing this, a user took out his device into the service center. After the service, he couldn’t face any type of issue which he had faced before. His explanation went like this. 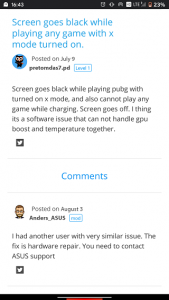 However, there are no official announcements regarding the same from the brand. It is a major fault from the brand since the hardware fails within a year of usage. Since these devices are designed for extreme gaming purposes. Do let us know if anyone of the Asus Rog Phone 2 users experiences the same.

A comment on "Asus Rog Phone 2 has some serious hardware issues!"