August 22 was the day when Google has rolled out the Latest Android Nougat release OTAs for many devices. Unlike earlier times, this time there is no Nexus branding devices with the latest Android Nougat rather the first phone that comes out-of-box with Android Nougat is the LG V20, which is confirmed by Google. Samsung had also released the Galaxy NOTE 7 earlier this month but with Android Marshmallow out-of-the-box and it will definitely take time to get the Nougat update.

Among the Latest Nexus devices, Nexus 6, 6p, 5x, Pixel C and many other devices are getting Android Nougat OTA updates but a sad day for Nexus 5 users which will not be getting the nougat Update officially but we have an unofficial Android Nougat ROM for Nexus 5. Here we have covered the manual flashing guides of Android Nougat build nuber NRD90M for the following Google devices:

If you want the Nougat OTAs immediately then you can join Google’s BETA program to get it soon.

Android Nougat Sources pushed in to the AOSP branch:

Stay tuned to us to get the latest Android Nougat ROMs for your devices or else you can search for your Device forum and if you don’t find your Device in our forum’s list then you can request for a New Device Forum. 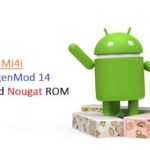