Android 10 based ColorOS 7 for Oppo R15 rolling out

The new firmware update brings the Android 10 feature including dark mode, Focus Mode, gesture navigation, and more. Also, Oppo’s own new customized ColorOS version, ColorOS 7 UI. The company is rolling out the OS update in batches. The stable ColorOS 7 update comes with the CPH1819EX_11.F.12 build number and currently rolling out in Australia.

Oppo R15 came with a 6.28-inch AMOLED display panel with 1080 x 2280 pixels of resolutions and offers a 19:9 aspect ratio. It has Corning Gorilla Glass 5 protection on top of the display. The phone powered by Octa-Core CUP under the hood along with Mediatek MT6771 Helio P60 (12 nm) chipset.

Oppo’s R15 featured with dual cameras on the backside along with LED flash, 16-megapixel main and 5-megapixel secondary. For selfies, it has a 20-megapixel camera. The phone available in 4 GB and 8 FB of RAM variants and both variants have 128 GB internal storage option.

Oppo R15 has a Non-removable Li-Po 3450 mAh battery inside the body. It also came with VOOC fast charging tech. The phone is available in Hot Red, Snow White, Star Purple, Fantasy Pink color options. There is a fingerprint reader on the back panel of the phone. 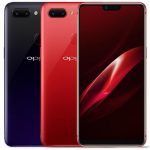